I dedicate today’s post to my excellent Latin teacher and one of my favorite characters, Fr. Art Humphrey, who would never hesitate to correct anyone’s Latin/English usage in a lighthearted and friendly manner. The first thing Fr. Art taught our class, during our first class on the first day that we were in high school, was “Noli me tangere, porce” (Don’t touch me, pig). He told us to say this to any man who ever tried to come near us. I’m sure that many of my fellow alumnae of Lacordaire Academy have said this on many occasions. Who said that learning Latin is useless?

I’m always a little bit puzzled when someone refers to me as an alumnus, alumni, or alumnae. I think it should be pretty apparent that I’m a woman, as well as that I’m just one person.

Today, I’ll provide you with a quick guide to the elusive correct use of alumni/alumni/alumna/alumnus. In the spirit of Fr. Art, this guide will take the form of a discussion of noun declension.

In Latin (as in many languages other than English), nouns are assigned a gender. Adjectives that modify the noun agree with the noun in gender. Genders in Latin are masculine, feminine, and neuter. As in English, nouns in Latin are declined to indicate number (singular or plural).

The word “alumn-” in Latin can be declined according to the person or people to whom it refers.

One female graduate is an alumna.

One male graduate is an alumnus.

Two or more male graduates, or any group two or more graduates in which at least one is male, are alumni.

When graduation time rolls around in a few months, your correct use of the words alumna, alumnae, alumnus, and alumni will make everyone think you’re a Latin scholar! 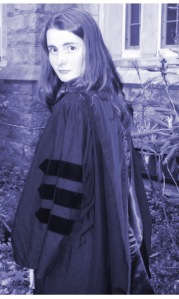 The day I became an alumna of Drew University