Santa’s Communications Consultant, Day 2: Based ON

When Santa first approached me about my new temporary job as Honorary Elf on communications consulting detail, he expressed his perplexity at a neologism that he has noticed in letters of late. “For some reason,” he told me, “people seem to have given up on”—and here, I was afraid that he would say “me.” But no—he said “on saying ‘based on.’” Phew! An idiomatic idiosyncrasy is much easier to resolve than a lack of belief in Santa Claus.

I let Santa know that he is not alone: this year, I have seen and heard an alarming spike in incidences of “based off of” and “based off.” I’m not sure why this is. The correct idiomatic expression in English remains “based on,” regardless of our collective choice to ignore this expression.” “Based off/off of” might seem attractive because it makes the basis seem like a starting point (which it is), rather than the conclusion—but “based on” gives the point the writer/speaker will make much firmer grounding.

This gingerbread house was BASED OFF OF its base. Tragedy ensued.

So, as you see, Santa has every right to be concerned about this particular grammatical construction. In 99.9% of cases, when you might be tempted to say “based off of,” you really mean “based on.”
And if you forget this simple rule while building your gingerbread house, you know what will happen. 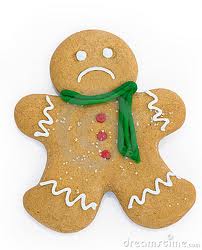