Each season has a name: winter, spring, summer, and fall…err…autumn. Which is it?

Many of us might prefer “autumn” because it just sounds nicer. Something about the word is mystical and misty, evoking images of fog-wrapped trees on a forested hillside. Even the spelling of the word is alluringly mysterious: why the silent “n”? Is it a vestige of an ancient spell that the season cast on the unsuspecting green world? Autumn came into English through Old French (even more romantic!), and its first recorded use in English was in Geoffrey Chaucer’s translation of Boethius’ De Consolatione Philosophiae. So much history—and so much mystery—in this seasonal word.

But “fall” is just simpler! Four letters. One syllable. Quickly conveys the idea. For this reason, many of us (especially in North America) use “fall” more often than we use the alternative.

If you’re among those who begrudgingly, in the interest of time and simplicity, says “fall” instead of “autumn,” there is no need to fret! You’ll be happy to know that “fall” has a more colorful derivation than you might realize. The origin of “fall” as a season’s name dates back to Renaissance England, when “fall” was not simply “fall,” but “fall of the leaf.” “Fall of the leaf!” How picturesque! Sadly, by the mid-17th century, brevity won the battle, and “of the leaf” had fallen from “fall.”

Yes, it’s true: “fall of the leaf” is now torn asunder. However, artistry is not gone from the season of “fall” if each time you refer to the “fall,” you remember that you are uttering the remnant of a poetic expression that, years ago, might have crossed the lips of Shakespeare himself.

(For more information on the derivation of these and other fascinating words, see the Oxford English Dictionary here.) 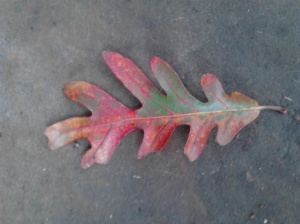