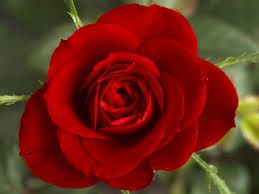 During Holy Week each year, I like to read “I See His Blood Upon the Rose,” a poem by Irish nationalist poet Joseph Mary Plunkett. Plunkett was an eccentric character: a sickly young man who traveled around Dublin in medieval-esque costume. A leader of the Easter Rising in 1916, he was arrested by British troops and married his fiancée Grace Gifford in jail on the night before his execution. Although Plunkett was not the most practical person, his mystical poetry is artistic and provides evidence of his great faith. I’d like to share Plunkett’s “I See His Blood Upon the Rose” with you, and immediately below the poem, you’ll find an adaptation of a short section of my dissertation in which I discuss this poem.

I See His Blood Upon the Rose
by Joseph Mary Plunkett

I see his blood upon the rose
And in the stars the glory of His eyes,
His body gleams amid eternal snows,
His tears fall from the skies.

I see his face in every flower;
The thunder and the singing of the birds
Are but His voice — and carven by His power
Rocks are His written words.

All pathways by His feet are worn,
His strong heart stirs the ever-beating sea,
His crown of thorns is twined with every thorn,
His cross is every tree.

In “I See His Blood Upon the Rose,” Plunkett reveals the holiness latent in the humanity of Christ. In this poem, which is perhaps best-known and most widely anthologized work, is clear evidence of Plunkett’s mystical vision of the nearness of Christ in the natural world. Plunkett ties national aspirations and religious devotion are closely together, creating a seamless effect. In an uncritical 1918 assessment, Peter McBrien wrote of Plunkett: “That flexibility, that combination of strength and sweetness…, that sunlit sense of the nearness of God which irradiates all his work and shone from the man himself, the white-heat intensity of his love of God and man and Ireland, which spelt its winning graciousness over everything he did, all that will bear witness, in the poems he has bequeathed to us, a soul of Spanish steel tempered in icy water” (36). The natural imagery in this poem is evocative, although simple, since it involves multiple senses. The language that the persona uses to describe the admired Christ is very similar to that which could be used in the description of a beloved. Although this poem is about the constant reminders in the natural world of Christ’s Passion, it is not foreboding, but comforting. The constant presence of Christ in nature is a source of solace for the persona.

It seems as though a concluding stanza could be added to the poem in order to provide a sense of closure; perhaps a discussion of the reminders in nature of the Resurrection would round out the poem. Yet Plunkett chooses not to include a stanza of this sort, possibly because he intends the poem to indicate the constant significance of Christ’s sacrifice for man.

And if Christ’s sacrifice is omnipresent, it can be emulated. Beginning the poem with the image of the rose, a symbol for Ireland, Plunkett ties the sacramental nature of this poem to his denominational and national experience. Further, the Passion of Christ is evoked not only in the beauty and power of nature, as in the rose, the stars, snow, rain, flowers, thunder, birds, and rocks, but also in “every thorn” (ln. 11); that is, Christ’s suffering is tied to the suffering of his followers. For someone of Plunkett’s mindset and political bent, this statement has implications for the nationalistic movement, as well as for religious expression.

This poem hinges on the acceptance that God is present and active in the world, and on the assumption that the Incarnation and Resurrection have sanctified the universe. One might explain the permeation of nature by God’s love in this poem by applying a principle that Steven J. Brown, SJ discusses in “Personification”: “it is one thing to think of various separate objects as endowed with personality; it is quite a different thing to see all nature pervaded by one great Presence and Personality, to see it as a manifestation of its Maker” (416). “I See His Blood Upon the Rose,” we see an overall infusion of God in nature, leading not to pantheism but to a reminder of Christian spirituality through what Plunkett considers to be God’s strategic placement of natural symbols, which function as God’s “written words” (ln. 8).